The original Enterprize was built in Hobart in 1830 by William Harvey and William Pender as part of the early coastal trading fleets of southern Australia. At that time, most bulk cargo was transported by sea. Enterprize carried cargo such as coal, livestock and building materials and, on one occasion, over 180 sheep.

In April 1835, Enterprize was purchased by John Pascoe Fawkner to search for a suitable place to found a new settlement in the Port Phillip District. Enterprize sailed from Launceston on 21 July 1835, but only travelled as far as George Town in northern Tasmania, where Fawkner was forced to remain by his creditors. Enterprize then departed George Town on 1 August 1835 under Captain Peter Hunter. 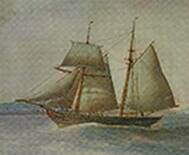 Searching for a place to settle, the party looked first at Western Port Bay and then at the eastern side of Port Phillip. They eventually found the Yarra River, and after warping the ship upstream by hauling on ropes attached to the river bank, they moored the Enterprize alongside the river bank at the foot of the present day William Street. On Sunday, August 30th, the settlers disembarked and at once began to put up their tents, build their store and clear some land for growing vegetables.

European settlement at Melbourne had begun.

After this, Enterprize continued operating as a coastal trading vessel for a number of years. She eventually disappeared off the shipping register in 1847, having been wrecked on the bar of the Richmond River in northern New South Wales, with the loss of two lives.